Would it be possible to add the possibility to specify multiple id to the https://api.tfl.gov.uk/StopPoint/{id}/Arrivals ? where id would be, similarly to other API, a comma-separated list of stop ids ?

Use case is: bus users want to check more than one stop at a time.

@nakkore You do have the ability to make up to 500 Requests per min. Every minute of every day. Almost without failure.

You can make more than one at the same time using multi-curl requests. For example in PHP this is done by using PHP: curl_multi_exec - Manual

The point is to avoid doing multiple requests and waiting for each call results considering that the API ,sometimes, takes a while to give an answer.

Unfortunately passing multiple StopPoints as an array is unsupported.

You can make calls to get arrivals by line or mode however. I would not suggest doing mode for bus though as it’s rather hefty and will take an eternity.

I have seen screens at bus stations which combine departures from different stops. Presumably this uses the same source so how is this done - is there some sort of hierarchy in place for bus stations that enables it to be done?

Do you mean the bus station totems like this? 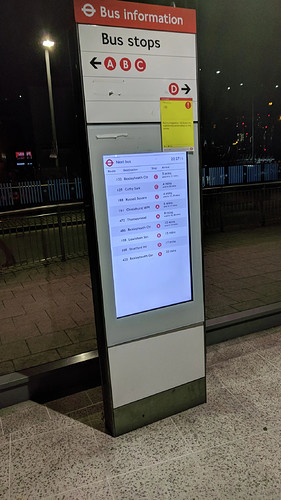 If so, this is a website that is powered by Countdown API. From what I understand it is pre-programmed with the stop IDs for each station. It’s a lot more manual than you’d imagine!

Thank you @jamesevans.
I was hoping that it could be added…

There is a hierarchy in the stops data as each is allocated a four character transit node. FoR example, all stops at Barnet Church may well share the same transit node (I haven’t checked). I have a feeling it might be used when coding on bus survey forms. It is available alongside Atco code etc in the stops metadata but almost certainly it is not used by the real time systems. Even if it were, it might be too narrow or too broad for particular uses.

When they don’t work they show thier URL…

As a general point, public APIs are always provided on an as-is basis. If they don’t do what you want it’s the coder’s responsibility to deal with it, the government doesn’t do requests!

Also given TfL finances are quite bad at the moment, @jamesevans and the team don’t have the resources to do a few simple edits on their own website.

@briantist I know you’re right… but let us dream for a moment. I wish we had all the same rational view on things and the world and the government and so on…but yes let’s say that this small feature request goes straight in the backlog and will be picked up in 10 years time when we all have recovered from the pandemic and other misfortunes and TfL hopefully will have plenty of money to invest. Let’s be optimistic.

Fair enough. I’m not sure I’m going to wait 10 years for something that took me an hour to code up myself…