Still no new data. Or for that matter response.

There was an update this week. This reduced the number of incorrectly overwritten files to 300. This does not include files which should have been loaded (such as for the 292 frequency reduction) but have not. I find myself wondering whether they were created internally the week before (but not released) and then overwritten this week by the older files again!

This week’s upload included a large number of school day extras on both normal and special school (600 series) routes. These are indicated by the use of a prefix (e g V117) or - where two operators are involved - also with a suffix (thus V655 and 655V).

The user of the TfL site would have to know that these “routes” exist in order to search for them via the interface. Something to be said for using my site at
http://www.timetablegraveyard.co.uk/wt_index.html
as it brigades the V routes with their parent routes.

Is there anybody home?

A further small reduction in the number of errors this week, mostly due to even newer files.

Still no sign of the reduced frequency 292 from 29th August (the week that was missed) or for that matter 111, which I am told was also revised then. There may be others.

I am sounding like a broken record (google it, millennials) but the complete absence of ANY feedback is extremely frustrating. No acknowledgement that there is a problem. Let alone that it needs to be solved at some stage. Even less an indication of what the problem is, or what the solution might eventually be.

It is starting to look as if I am going to have to request some WTTs via FOI, which is what the system was set up to avoid happening. I don’t want to do that given the stress from Covid on TfL in general and the FOI team in particular but it can’t just carry on as it is.

I’m here watching, but there’s now much I can do other than note your posts.

I address this to you because there seems no other way in.

In this week’s update, about 440 WTTs have been changed. Of these, about 30 are genuinely new. The others are obsolete files. This is absolutely ridiculous. It means that roughly one fifth of the links on TfL’s own website now take the unsuspecting user to an out-of-date file.

On my own site, I hve set it up to point to the TfL files to access the current versions but this was based on the fallacious assumption that TfL would actually manage the system properly. Either I do a lot of work manually to highlight what is wrong or I just don’t bother any more linking to what should be the definitive source for current files.

I’d be ashamed if my organisation produced a dog’s breakfast like this. I post about it. Nothing changes. It just goes on and on.

Is there a contact actually involved in this? Who knows, I might actually be able to help, but I can’t if the collective head is stuck firmly in the sand.

An extremely fed up Michael

Down from 601 to 425 errors this week. List in usual place, just in case anyone from TfL actually wants to DO something about this. Even just to acknowledge that there is a problem. Please. Pretty please.

@mjcarchive apologies - these were not updated this week. I have just completed this now. Please let us know if there are any issues with any of the files. We (the webteam) dont generate the timetable files themselves but we can pass any queries relating to the data to the buses team to investigate further.

@neamanshafiq
Thanks for the reply. However, I think my reluctance to start a new thread has misled you as to the current nature of the problem!

The WTT update indeed did not happen on 2nd September, so we missed a week. Since then, updates have happened on time (3am on a Tuesday morning).

The problem is that a substantial minority of the files (425 a the moment) that are being uploaded are incorrect, in that WTTs with later dates have been present in the past but have been overwritten with older ones. This problem has been going on for over a year, though there was a period within this when things appeared to be going smoothly.

I see from the Data Bucket that the file set has been updated earlier today but as it had already been updated on Tuesday it will not have made any difference.

To confirm this, the first file on my list of incorrect files is the Friday WTT for route 12. The Data Bucket (and TfL’s own web pages) still take you to a schedule dated 23rd November 2019 (for Service Change 52891). But at some stage this has overwritten a file dated 13th June 2020 (Service Change 55314). You might think that the older WTT has simply been reinstated but my understanding is that if that happened it would be reissued with a fresh Service Change Number.

There are more ridiculous examples, such as the 67 where old WTTs for the Arriva operation have overwritten newer ones for the (current) London General operation.

I might add that for some routes I have observed oscillation between two, even three, different files, a kind of schedule hokey-cokey.

The issue thus goes back to the actual process of identifying the files to be created and/or the way the team interacts with the system (goodness knows how many computer system assume perfection from those running it!). My best guess is that for some reason more than one edition of a file is being marked as current and it is pot luck which is pocked up to create the publicly available file.

I have been maintaining a list of the errors for weeks and publicising it here. The current version is at http://timetablegraveyard.co.uk/files_incorrectly_overwritten.htm. If this information has been passed on to the bus team, nobody appears to have done anything about it!

I appreciate that TfL has a lot on its plate right now and I am not expecting an instant resolution. All I would like to see right now is appreciation that there is a problem, an explanation of what is thought to be going wrong and an undertaking that at some stage in the future it will be properly addressed. The absence of any response week after week after week has been dispiriting, to put it mildly.

I would be happy to liaise directly with someone on the bus team, if it would help.

I hope that someone has looked at my posting of 16th October though the track record to date does not leave me optimistic.

The number of incorrectly overwritten files is very slightly down this week.

I have produced a table which summarises the position for the most recent three weeks. 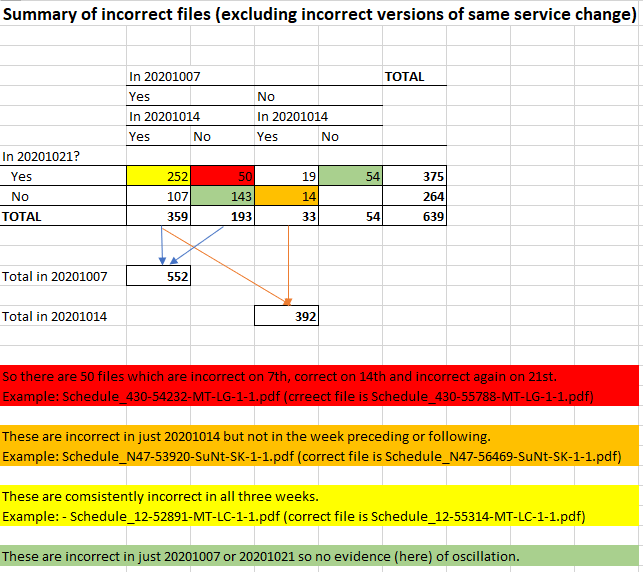 The 50 red ones were correct on the middle week but incorrect each side of it, which illustrates the oscillation issue. The 14 orange ones are the reverse - incorrect in the middle, correct either side. The yellow (the biggest group) are consistently incorrect, though I would lay good odds that if I took the analysis further back I would find evidence that some of these are dropping in and out.

It is worth stressing that all 639 files have been incorrect at some stage during this three week period.