I’ve been playing around with the API feed for a bit now and noticed that trains terminating at Leytonstone or Marble Arch don’t appear in the feed, nor any services at Theydon Bois.

Just wondering why these don’t show up in the feed and if they could be shown?.

From memory, Central lines only terminate at West Ruislip, Ealing Broadway, White City (where there is a reversing Spanish-solution platform 2/3), Hainault, Epping, and Loughton (another Spanish-solution) layout. Plus there’s the Woodford to Hainault shuttle.

The problem is that terminating trains at other places then the train would have to cross the other running line causes terrible delays in the other direction, so it’s only done in technical emergencies. I don’t think it’s in the timetable but you can look at the PDF here

I’m pretty sure that years ago Marble Arch was a regular timetabled turn for the Central Line, as was Liverpool Street at the other end. I’d be surprised if the train involved crossing the other line. More likely the Wood Green layout beyond the platforms from which the train rejoins the other line. That can be disruptive, which is probably one of the reasons why their use, even if still possible, is irregular (Wood Green is not used very often these days either). Leytonstone has a junction immediately north of the station so I don’t know how they would turn a train there.

Unless I have misunderstood it, the OP’s question though was about why trains heading to those destinations are not returned at all. Surely they would appear even if the destination is not noted as such in the WTT (they do for buses). Turns like these exist on all tube lines, I think, in order to manage a disrupted service and if trains using their turns were omitted the travel info would be pretty useless.

Theydon Bois showing nothing at all seemed to be the other question.

Yes, there is a central turn-back siding at Marbel Arch 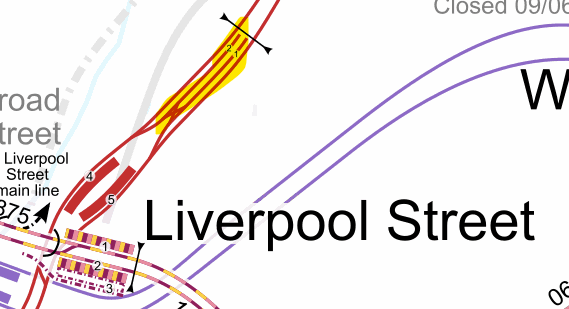 The operational problem is that to turn back at these points means that you have to have the driver check that all the passengers have detained, which can take several minutes (which doesn’t need to happen when the turn-around is in a Spanish-solution place).

So there is a delay to detrain and then another delay as the train then has to wait for a gap in the services running in the opposite direction.

The core of the Central line has trains every two minutes, so it’s totally incompatible to this type of turn around. Also there’s little point as huge numbers of shops/homes/jobs out in Zone 2 (both Westfields for a start) so the is nothing to gain from chucking out Central line passengers in Zone 1, as they would just be trying to cram on to the already-full train behind.

@ngohil You know there’s a strike today and there are no trains running on the Central line at all in Zone 1?

Most Underground lines are not running while trains and buses which are working are very busy.

There is no service on the Bakerloo, Circle, Hammersmith and City, Jubilee, Metropolitan, Piccadilly, Victoria and Waterloo and City lines
The Central line is part suspended with only some services outside of Zone 1 running
On the District line, trains are only running between Dagenham East and West Ham and at a reduced frequency
The Northern line has a reduced service which is running between High Barnet to East Finchley, Finchley Central to Mill Hill East and Edgware to Golders Green, with no service on the rest of the line

This was the status earlier, not sure if it’s winded down now. 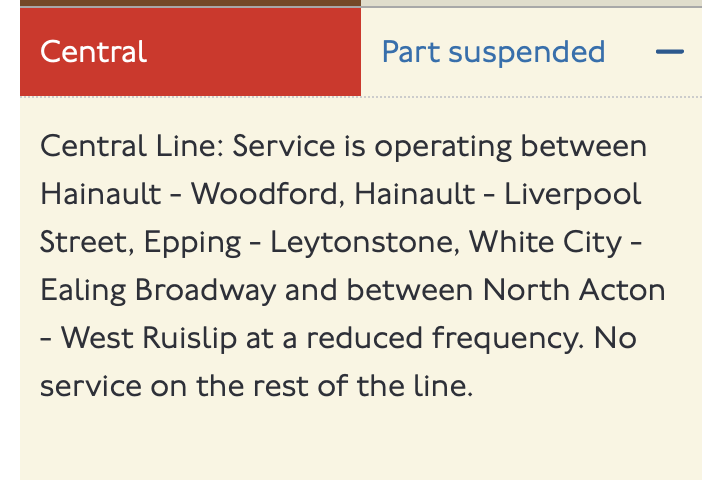 Welcome to the forum.

I’ll double check that we have all the Central line destinations mapped in our API.

We’ve had similar issues with mid-point terminators on other lines.

I’ve done an audit of the destinations for the Central line and have found these that need to be added:

I’m hoping we can get this out for this week’s data build and predictions for any of these will then show up. Some of these destinations (Holborn, TCR, Marble Arch etc) will be quite rare to terminate trains though.

I will do an audit for the other lines also to ensure we have correct coverage on those lines also.

I’ll update you here on progress.

Ah brilliant, thanks for the update!

I am now seeing the updated destinations in the feed.

However, for Liverpool Street I think (based on the current location field) it’s showing the feed for Loughton instead.

Also, Theydon Bois is still empty. Not sure if there are other stops that are similar to this.

Wondering if there was a fix for these?