Just for the info, if you want live bus information then the best place to get it from is the HTTP Digest interface at http://countdown.api.tfl.gov.uk/interfaces/ura/stream_V1

This is a bit odd in that it returns data in a CSV format, but it does push the data to the user.

The digest can be used with curl and so you get an event-based stream of data via “on_curl_write”.

I’ve used it for several projects now and it is very reliable.

Thanks for the replies. We’re looking forward to seeing what comes of TfL releasing data to the DfT feed. The use of block numbers in the DfT is data we’re often asked for which currently isn’t in the TfL feeds.

As background, I’ve been consuming the TfL Countdown feed for just over eight years now, originally translating the feed into enthusiast friendly Excel information and now as a minor part of the admin team behind lvf.io .

Have a good weekend,

If I could be allowed an idiot question, what are the “block numbers”?

Any update on this please?

Apologies for no response earlier.

The recent update on this data is that it will be available via DfT’s BODS, rather than our Unified API. I don’t have any direct links yet, but DfT are working on getting this data live soon.

Thanks for the update Jakub. I guess it’s in their beta system at the moment. Is it too early to say if the data via BODS will provide any other extra information such as bus loading info. / USB charging info that some other operators currently provide to BODS?

Will it be mandatory for TfL operators to provide running/block number information to the DfT system? I ask because it is unlikely to be the chase for Fred’s Coaches of Upper Piddle as they operate two school journeys each day - and if it is not mandatory it quite likely won’t be provided. I tend to think of these numbers as a London thing but that is probably because they were only displayed on LT buses and their successors; they may be used internally. One large London operator actually claimed not to use running numbers for some years, arguing (I think) that it got in the way when managing the service and driver changeovers but that may have been spin!

It’s now mandatory for all operators to provide running / block numbers to BODS, see How to use bus open data under “Bus location data” and ‘Block Ref’. For the timetables operators provide to BODS, BODS now audit the data and provide a “quality score”, one of the criteria here is the presence of block numbers, see Bus operator requirements . This link is to a Data Quality Report for a set of First Leeds timetables (which got 100% btw).
One of the things we’ve found for LVF is that actually having block refs in the location data match those given in the timetable TxCs is hit and miss though

. I believe the TfL timetable TxC files do have the running numbers, so I’m really looking forward to seeing how these match up to the location data.

Thanks, Simon. The TfL XML files on Datastore do not have block numbers AFAIK but of course its absence from one particular output says nothing about whether it is in the input.

We are not providing bus loading nor USB charging info in the feed, so it can’t be present in BODS. We don have a space in the feed for bus loading, but we don’t have the data coming in yet.
Hope this helps!

Is this some TfL data in BODS we can see? 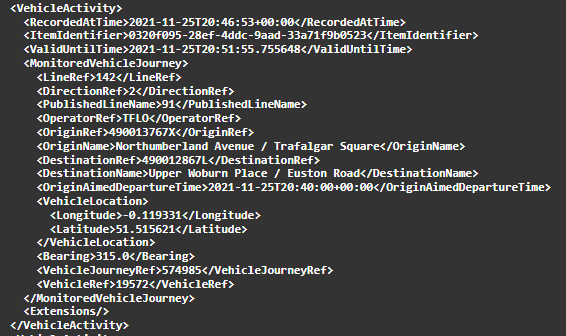 @SJCooper I’m thinking you might find Technical guidance: SIRI-VM - GOV.UK the thing to answer these types of question?

Yes it is. We see >7000 new bus locations with OperatorRef=TFLO, they all refer to London agencies.
Btw do you know if the vehicle positions are available anywhere in TFL api now?

(Not sure if this is the right place to report this) A few observations about the following bit of TfL Bus Open Data data:

Might the behaviour of the destination data be sort of deliberate, with the next stop served being described (misleadingly) as such?

I am assuming that the final destination and other info (block/running number) are available but in a different chunk of data.

The BODS data isn’t meant to provide ‘Next Stop’ information which is what TfL seem to be doing here. This is hardly customer/passenger friendly “Is my bus going to the end of the route? Don’t know but it’s going to the next stop…”.
All the BODS data is meant to have is origin (and depending on which page you read for mandatory fields, maybe the destination - see below*). It’s one of the reasons why having the block ref (running number) is so key (and why BODS have made it a mandatory field (subtle hint TfL peeps

) - so that you can tie the trip up to the timetable (TxC) and work out from that what time the bus is due to serve the next stops. Unfortunately doing it this way, unlike the Countdown or Unified API, takes no account of known traffic delays and is a lot more CPU intensive on the server the developer hosts the system on.

Of note, unlike the TfL Unified or Countdown API, the data from BODS seems to include garage journeys… look for the all upper case origin or destination.

Welcome to the TfL TechForum!

The VehicleRefs are the same as those provided in TfL’s Countdown API feed which also includes registration numbers. We’ve been using VehicleIDs over on LVF for nine years now…
I’m wondering if the date discrepancy is due to TfL’s services using a 28 hour clock for scheduling purposes?

I understand the different between LineRef and PublishedLineName, what I don’t understand is why TfL have implemented it this way when all the other operators around the country have been sensible about it. If ‘regional op’ has two routes with the same public route number, let’s say “36” then in their data both will show PublishedLineName=“36” but the LineRefs may be “36” and “5036” so they can be differentiated - at least there’s some commonality as both include ‘36’. For TfL to use a LineRef which may match a completely different route is just odd in my opinion.
__ 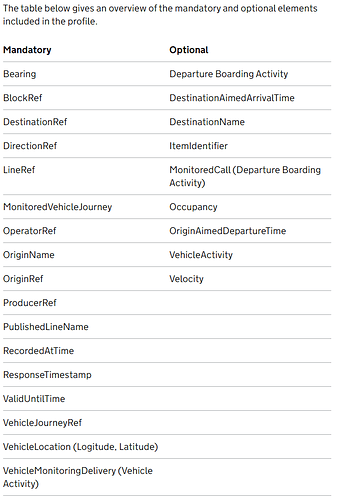 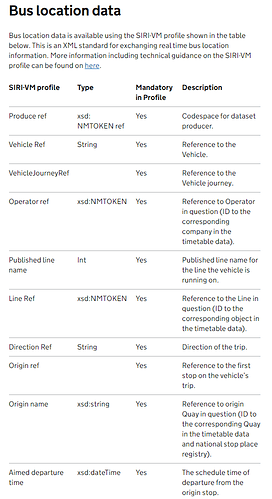 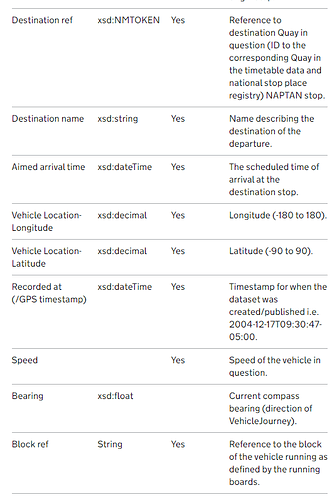 I’ve already complained to BODS about the mandatory data inconsistencies.

I’ve just spotted another issue with TfL’s use of LineRef and PublishedLineName, the BODS API allows ONLY for “LineRef” to be queried, not 'PublishedLineName", so if I want to see what’s running on TfL route 276, I have to search for LineRef “188”. Not exactly logical is it?

Hi Simon, thank you for pointing this out. We are aware of it and it’s very unfortunate, as this is how DfT allows querying within BODS. Our raw data includes LineRef which is the route number. DfT then converts it to PublishedLineRef and adds their own LineRef. We have no control over this process unfortunately. I’m sorry about that.

What you can do is to get ALL data once and find which LineRef corresponds to which PublishedLineName, and then query data for that specific LineRef. Hope this helps!