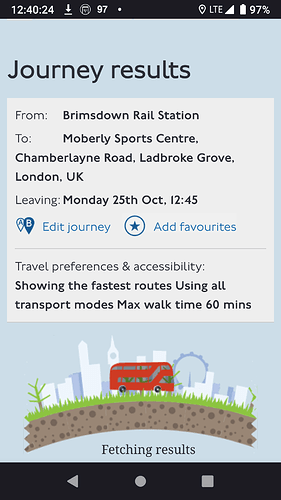 But works for this source and destination separately on other journeys. As an example, change the source to W1A 1AA and keep the same destination.

In Firefox (mobile and desktop)

Anybody else finding this?

Initially got the same result on Chrome but then it seemed to work. Now today it doesn’t again.

I also tried the adjacent Moberly Spa. This either didn;t work or, having selected the Spa from a list of options under “Moberly” I was then asked to choose from two places several miles away.

All very odd. Unfortunately intermittent errors are the hardest to track down and cure.

We’ve put in a fix for this now. It was an exception thrown on some journeys after we switched fares in Journey Planner back on last week.

Thanks James. I confirm it’s working reliably for that journey now.

Also good to see the fares back. I spent several hours last week trying to work routes for getting two people to Watford Junction by different routes, one using contactless and the other using a freedom pass.

Having the fares in the Journey planner would have helped slightly, but the real problem is that Journey Planner doesn’t have:

Yes, I know (after several hours working it out) that a good answer is for the Freedom Pass user to go via Euston, fast to Harrow and Wealdstone and then Overground the rest of the way, but the contactless user has to avoid Euston and go most of the way by Overground.

There’s absolutely no way of persuading Journey Planner to calculate the correct Freedom Pass journey as a single journey (you can’t tell it to use National Rail only for the first part of the journey so you have to do it in two steps, then cut and paste the results together) and likewise you can’t plan for the contactless user unless you know in advance that they must go via Willesden Junction.

But all of that is something that Journey Planner could and should be able to do just by marking and filtering the data accordingly.

At the very least a “avoiding Zone 1” would be great! It sometimes handy to save yourself 50% of the fare for the same timings… 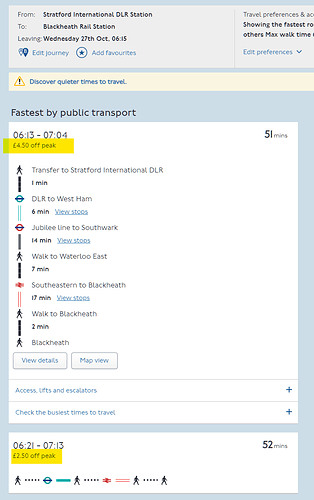