Live predictions unavailable on both unified and countdown API

Countdown and Unified API live predictions seem to be down.

That’s right - we’ve raised an incident to our colleagues who look after the Countdown system.

I’ll update further when I have more details.

@jamesevans There’s no live Jubliee line information out in the stations either.

This issue has now been resolved. It appears there was an issue in the iBus network (the onboard systems that are installed in buses).

@briantist - they were working earlier when I was on there, but those boards are powered directly by the signalling system and I don’t think we had any impact on the data coming from trackernet from what I could see.

The station staff came up with a nice lo-tech solution: 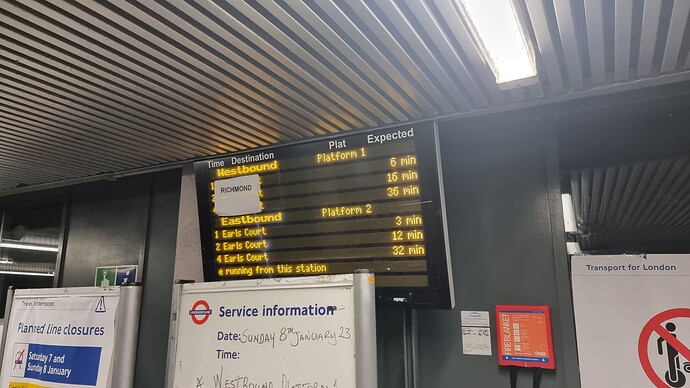 @jamesevans I think the departure boards at Stratford Jubilee were showing the timetable/signalling data (much discussed before) but there was no data on any of the in-station indicators between Westminster and West Ham either at the Westminster gateline or on any platform indicators I could see on the train.

And there was no online data Jubilee as there is leaky 4G the whole way and I checked.

@briantist do you know roughly what time you saw this?

I’ll try to audit the district next.