We’re pleased to announce the release of two new sources of accessibility data that in combination with existing TfL Open Data sources allows the calculation of which step-free routes are possible across the TfL network. This coincides with the release of new step-free lift status functionality in the TfL Go mobile app.

This API returns a list of the step-free lift routes at stations across the TfL network that are not currently available. The step-free lift routes are identified by codes for the start and stop areas within stations that the lifts connect between. The stations in question are identified by NaPTAN codes. Step-free lift routes are defined as those that are necessary for wheelchair users to access transport modes at a station. They include journeys between a station entrance and a platform, as well as journeys from one platform or another. The API uses TfL operational data and updates once every minute. It can be found at: https://api.tfl.gov.uk/Disruptions/Lifts/

lrad-v2 is an xml file containing baseline accessibility information about all stations on the TfL network. It complements the Step-Free Disruptions API in that it identifies the step-free lift routes at each station via their start and stop area codes within a station. In addition to this it relates lift routes to the station topology, specifically the entrances and platforms that those lift routes connect between, including the names of the lines and their direction at platforms. lrad-v2 does not currently use NaPTAN codes but the Station Name attribute it uses can be cross referenced to NaPTAN codes using TfL’s Stop Point API which can be found here: https://api.tfl.gov.uk/StopPoint/HUBLBG

lrad-v2 also contains other accessibility data about stations including but not limited to: toilet location, presence of manual boarding ramps and level access humps on platforms, the size of gaps between trains and platforms and accessible interchanges to other modes of transport such buses or National Rail.

As well as an xml file, lrad-v2 has an accompanying xsd file and a technical specification pdf which can all be found in the ‘Accessibility and toilets’ section on this page: https://tfl.gov.uk/info-for/open-data-users/our-open-data

Welcome @DanielB to your own forum!

That’s brilliant. I had to hand-code the step-free manual for my last job.

Does that mean there is a live feed of all broken (or disabled by TfL, grrrr) lifts?

I’m only asking as the NRE Step Free broken lifts I’ve never been able to get anything out of it.

BTW I’m very impressed with the in-station step-free diagrams at Stratford, they are very clear.

Thanks for the welcome.

There is indeed a live feed of all disrupted TfL lifts:

Sorry to be a bit negative, but it doesn’t mention that the lifts at Stratford are inaccessible during peak hours (“because Covid”).

Also missing is that you can’t use the step-free lifts to interchange Woolwich Arsenal. Well not unless you’re so stuck you see the tiny words on the poster on the gate to “ask a member of staff”.

Thanks for the information @briantist

I’ll find out more about why these aren’t represented, but in the meantime could you give a bit more detail about the way in which the lifts at Stratford are inaccessible during peak hours?

Stratford are inaccessible during peak hours

This is what happens if you need to use the Westfield Exit during peak - have to go the long way round and that’s four lifts rather than one if you’re in the Jubilee line-end tunnel.

Say you’ve arrived at Platform 1/2 and want to leave to go the City Bus Station or East Village, you can’t go up the lifts as staff block you. So it’s … 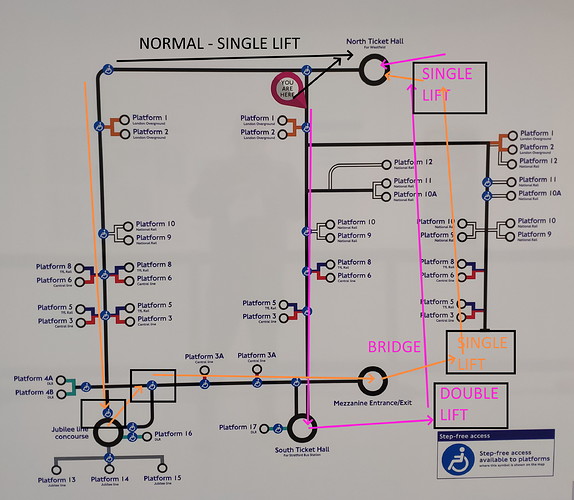 I’ve got a bad leg at the moment (“hidden disability”) and so I use the DLR to Stratford International because it’s all flat and escalators.

I’m sure that someone isn’t really trying to make people’s lives harder.

The live feed of disrupted lifts reflects the information that it gets from the TfL reporting systems - if a lift isn’t reported as disrupted in those systems it won’t get into the feed. I’ll raise this with colleagues to see if these lifts can be more accurately reported.

Thanks. I appreciate that everyone at TfL is under huge strain from trying to work with CV19 around.

Another feed that would help people with invisible disabilities are when public toilets - as listed online here - http://content.tfl.gov.uk/toilets-map.pdf - are taken out of service. I note with personal interest that Dagenham Heathway toilets we locked out of service last time I tried to use them. As they are at the far end of the platform from the ticket office, it’s not practicable to ask staff when you find them shut!

But yes - GIGO is a useful thing to remember.

Live toilet status is something we’re definitely interested in reporting, the benefits are clear. At the moment we’ve got a bit of a way to go before that becomes a possibility unfortunately.

Thanks! I guess some things are easier to automate than others. I guess TfL can’t just buy lots of consumer smart locks and deploy them, it’s going to need … better things.

I’m pleased that TfL is still moving in the more-information-is-better direction, despite the challenges.

I absolutely love this new lrad-v2 dataset - so much useful information for those with extra accessibility needs. However, it does seem like some accessible routes are missing from the dataset and some information is slightly inaccurate. I didn’t have time to look through every single station and line, but here are some examples that I noted:

This is just a few of the issues I’ve found, hope it won’t be too much of an issue to get these and others fixed, because otherwise this as an amazing resource that I think will be extremely useful to developers.

It is worth running tests on the whole dataset looking for non-reversible connections?

This does seem entirely feasible and I’ll give it a go a bit later today. This would show up where data is missing, but I don’t think you can just assume the accessible lift route by reversing the order, considering some larger stations have one way systems in place (especially with covid), so the dataset would still need to be amended.

I’ve uploaded this list as a gist, available here: lrad-errors.txt (github.com), along with the script I wrote to generate it (not the most efficient but it works

One thing to note is that the accessible interchange only returns the line and direction, not the specific platform, so if there are multiple platforms going in the same direction there’s no way to tell if all or only some of them are accessible in my list, so even my list may have a few issues at bigger stations

Well, that’s excellent work! I would think that most of this is errors because:

For larger stations you can theoretically have only one way accessibility to a platform if there are different routes to and from the platform to manage large crowds, one could have a lift and the other may not, but I doubt such a route system would be built because it’s just pointless frankly.

I looked up Euston Square in the dataset and only the westbound platform is actually included - there’s no information for the eastbound platform. I guess this partially makes sense because this is an accessibility dataset and there’s no accessible route to that platform, but I think that it’s important to still include information like the step and gap sizes, regardless of the presence of lifts.

you can theoretically have only one way accessibility to a platform if there are different routes to and from the platform to manage large crowds, one could have a lift and the other may not, but I doubt such a route system would be built because it’s just pointless frankly.

Except this is exactly what TfL have done at several stations! You can’t access, for example, National Rail platforms 1 and 2 from the DLR because this route has been closed off to feed the tiny number of passengers though a one-way system. And you can get around the TfL-created peak-hours lift blockages if you don’t mind going round what is a very long diversion with multiple extra lifts.

This was also the case at Kings Cross St Pancras too, but they seem to have given in with this the last time I was there.

I think that it’s important to still include information like the step and gap sizes, regardless of the presence of lifts

Agreed. There are so many stations where the isn’t any logic for the platform not being step-free, such as West Hampstead Jubilee line which has “compromise” level platforms but only ever had one type of train call there and it’s totally a straight platform! I guess it’s waiting on a lift upgrade grant…

Except this is exactly what TfL have done at several stations! You can’t access, for example, National Rail platforms 1 and 2 from the DLR because this route has been closed off to feed the tiny number of passengers though a one-way system. And you can get around the TfL-created peak-hours lift blockages if you don’t mind going round what is a very long diversion with multiple extra lifts.

Oh no I meant it in a way that there’s no lift that you can use in one direction at all, rather than being sent a long way round. As far as I’m aware there’s no such station that does that at the moment, because it would be completely stupid - imagine being able to get onto a platform with a lift but not being able to leave by lift at all. Although I guess if a lift in one direction is out of service then this can become a possibility.

I do agree though that the long redirects at peak time like those as Stratford need to be reported through the API in some way though, so passengers know they’re going to have to walk a mile just to get to their exit.

Yes, this is what happens at Statford Station during the peak. You can go down in the lift from the station entrance by Westfield (my entrance) but can’t leave by it. It’s maddening!

The same thing happens at Woolwich Arsenal, you can’t travel in the same lift to the DLR platforms because of the one-way system. The now-pointless-NR interchange lift leads to an “exit only” area, and they have made the escalators one-way only to the “town” exit making interchange longer.

I’m sure there must be more of these locally done decisions, like the way the toilets are randomly locked at Dagenham Heathway.

Apologies for not getting back to you sooner. I’m still checking out some of the information about Stratford.

Regarding Woolwich Arsenal, my colleagues tell me that the step-free lifts are supposed to be accessible to the public without requiring help from a member of staff, but that they are limited to one person at a time.

Apparently the sign there should say: “Only one person at a time – if you need assistance, press the alarm button to summon a member of staff.” If at any point you get the opportunity it would be good to hear whether this is what you’re seeing in the station.