Overground status: why 2 entries with no geographical distinction and repeated info?

Hi - I was wondering if there’s any way to disambiguate the 2 Overground status items, which presumably cover 2 different parts of the line/network, yet don’t have anything in the data to define that.

There are several issues:

Dare I mention that the quality of Overground entries seems fairly poor at times. Can anyone give guidance to those who input?

Could easily be shortened to:
No service between Barking and South Tottenham while Network Rail repair line damage.

…and we also had the double-typo word DLEYAS (twice) for the morning peak.

Hope something can be done to tidy this data in this useful resource!

Hi - thanks for the response, but I’m afraid I can’t see how that clarifies this data. (There are also two diagrams labelled Figure 7).

Looking at the line status right now, as displayed on the TfL site, it says:
Part suspended
Part closure

Why 2 different statuses for the same issue? It’s very confusing.

The ‘reason’ text is mostly duplicated, but with additional replacement bus info for one of the entries - suggesting that is more localised to the affected area.

I’m getting the impression the first of the two entries returned from the API call is about the east side of the line and second is about the west… the order seems consistent with messages about Richmond/Clapham Junction side issues in the second. However with nothing to describe that in the returned JSON it’s hard to process it that way. 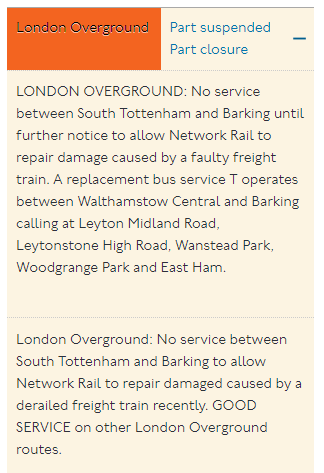 Ahh but where is the part of API response that says “this is about the Gospel Oak to Barking line segment”? There doesn’t appear to be anything to disambiguate the 2 entries.

That’s right, the public don’t need to know about TfL operating subdivisions when it comes to status messages, it makes them too complicated and only train nerds know about them. The travelling public need to know, briedly, what the problem is. These messages get propagated and auto-voiced and can’t include unnecessary technical detail. Many people don’t speak English as a first language, nor care about 150-year old railway history.

I do, which makes me a bit of “untypical user”

Of course users don’t know/care about ‘operating subdivisions’ and I’m not referring to railway history!

Line branches are relevant to every Overground user, just as with Underground branches.

Users do know which branch they are on (Clapham Junction - Stratford, Euston - Watford Jn etc.) so having the data specify which branch would be beneficial.

You say the travelling public need to know “briefly” what the problem is - but today’s info takes up 2 whole screens on a phone and the last paragraph is just a repeat of the messages above it.

Every entry starts “LONDON OVERGROUND:” which is unncessary when it’s within the London Overground status section. In the case of today’s status there’s 4 entries all starting with that. 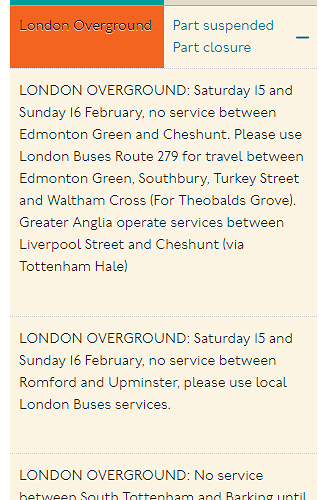 Sorry, I tried to help. If you want someone to kick about this, perhaps someone who works at TfL would be a better target?

Indeed, I imagined this would be the place to find such a person!

Not out to kick anyone, but I couldn’t see what all the references to 150 years of history & internal terms were about. I really am looking from passenger perspective. Sorry if you felt kicked.

You did highlight that Overground data is still treated in the same way as a single line, rather than a network… so thank you for the clarification.

I had expected each ‘disruption’ entry would specify which branch or area it would relate to, so a Richmond/ClaphamJ to Stratford branch user could filter out Euston-WatfordJ entries, for example, but it seems there is no distinction in the status API response.

That’s quite surprising given the size of the Overground now, especially when there’s usually more info to convey than for the Tube lines. Hopefully there’s a plan to add that.

In regards to the duplicate messaging, this is a rather unusual situation, and I’ll try my best to explain it.

For closed lines, we have 4 status categories:

In this case, the Part Suspended status was used due to the unplanned nature of the disruption.

Most Part Suspended messages are quite short-lived (signal failure, customer incident, faulty train etc) and won’t last more than a few hours. The system where these messages are input has a maximum scope of 3 hours into the future and have to be refreshed in this time or will expire.

In this case, we were informed that this closure was going to be long term (several weeks) and the scope of the message would not be suitable to accurately reflect this.

In these rare cases, we have to enter a duplicate message in an upstream system so that routes are correctly blocked in Journey Planner and that people checking the Status Updates page for future dates are correctly informed.

Unfortunately this duplication is currently unavoidable as we have multiple different channels running from different data sources.

I’ve been documenting this flow recently and a high-level representation is below: 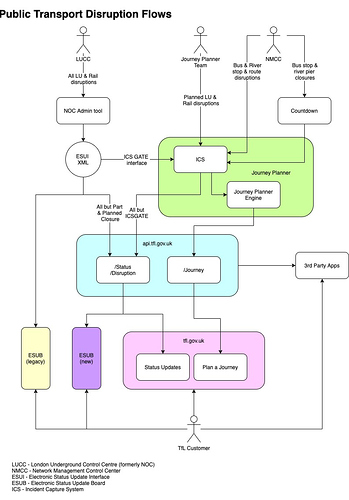 I am currently looking into ways of accommodating this type of disruption in the future without duplication.

You’re right in the fact that the Overground is considered a single line, but in practice operates as multiple different services as per @briantist 's document above.

There has been some debate in the past around whether London Overground should be a mode and each operation be given a different label (à la RER in Paris) but this never amounted to any change. I’m not sure if the appetite to look into this is there at the moment within the customer information circles - I can only really comment from a technical standpoint.

Thanks @jamesevans. Together with @briantist’s info that does complete the picture of current handling, I think.

My original reason for searching for section/service flags in the data was that in recent weeks, for all Overground customers, at first glance the status always asserts there is “disruption on the line” when in reality it might be far, far away on an unconnected section.

Customers are definitely aware of which branch/section they use. If you are at Clapham Junction you need to choose between different platforms for what are clearly 2 different ‘lines’.
If you are at Willesden Junction as well as 2 branches heading south from platform 4/5 there’s the ‘other Overground’ completely separate on the lower level.

Flagging that in data somehow would at least allow for filtering (nobody’s suggesting giving the Overground branches colour coding or alt names!)

The is the London Overground a line or multiple lines argument goes a little like this.

The branding for the London Overground as a single line stems from the original idea for creating an orbital railway that looked like a tube line. This version of the map (mine!) was widely used to explain it at the time. 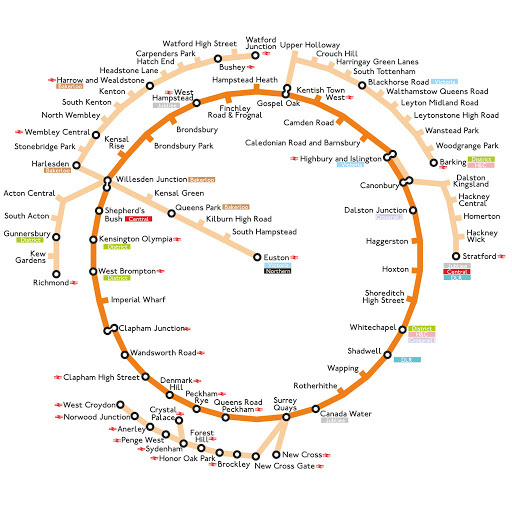 London Overground’s branding - and this is the important thing here - is that the service is like a tube in that you can a) turn up and go, b) pay with Oyster or contactless, c) runs early to late 7 days a week, d) walk-through trains, e) staffed from the first to last train, f) great interchanges, g) it just an orange line.

The idea of an orbital rail line means it like the world-famous Circle line, but outside. However, no-one is expected to go all the way around! The idea is that people will use it to take shorter journeys because there are much quicker (but more expensive) ways to get from end-to-end.

However, a few more lines joined the Overground and so it now looks like this 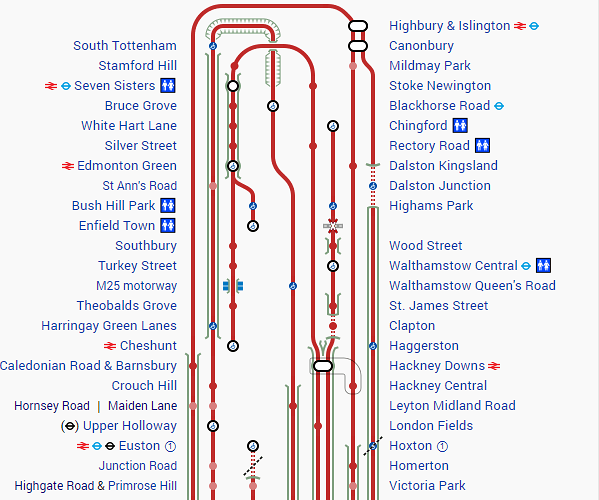 However, the question of needing to know subline names (as LOROL then Arriva Rail London called them) for passengers is interesting.

Almost ALL passengers never change from one Overground subline to another. Most journeys either start and end on a single section or interchange with a tube or NR line. If they don’t then the interchange sites at Gospel Oak, Willesden Junction, Surrey Quays, Hackney Downs/Central, and Highbury & Islington have incredibly good signage!

At these locations the route maps show where to go to get to each station on the sublines, but don’t need to call them anything because they are just “to these stations”.

Of course there are plenty of people who remember the names they have been called over the 150-181 years they have been around, but these are often unhelpful names in 2020.

Another problem is that the old names often referred to sections of line that have been transferred to other tubelines. The “North London line” is now - from Stratford eastwards - the DLR and Jubilee line. Another example here is is famous 1929 LNER diagram which is now part of the Overground/Northern/Circle as well as Great Northern… 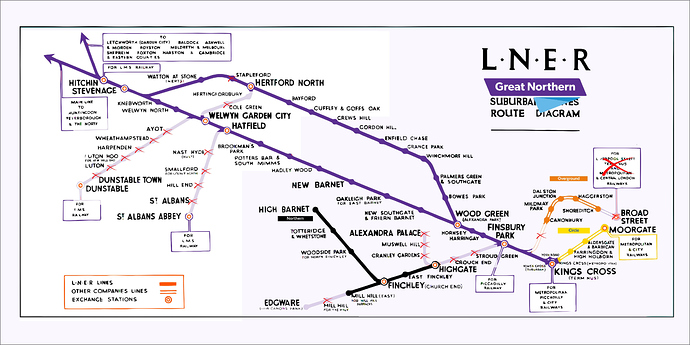 AHA! We’ve reached the nub of it, @briantist! Thank you.

“Almost ALL passengers never change from one Overground subline to another.”

The word ‘subline’ unlocks the door to explaining this need:

As you say, most Overground users only use their own ‘subline’.

That’s why they often only need to know if it’s a good service/disrupted on their subline.

After all, District Line or Northern Line problems way further along the line from where you will travel are usually still useful to know, due to the knock-on effect they have.

But problems on a different OG ‘subline’ are not.

Make sense? It’s basically what I had imagined would exist already.

@jamesevans - I do hope that could be fed back somehow. Let me know if I should email these thoughts elsewhere. Many Thanks.

If you look at it with the other TfL lines there are similar problems and they are often just ignored.

The Northern Line is an amalgamation of three railways, the City & South London Railway, which is now the “Bank branch”, the Charing Cross, Euston and Hampstead Railway now the “Charing Cross branch” and the London and North Eastern Railway, now the High Barnet branch.

The names of the central London branches appear north of Camden Town in the destination names (“Morden via Bank”) but the actual fact they are branches on gets mentioned at Euston and Camden Town, otherwise they are just the “Northern Line”.

This means there are never any direct trains between Tottenham Court Road and Angel, say, as you might expect from a line in the centre with a single name.

The Piccadilly Line was also the amalgamation of two lines which met at Holborn, but shares Met tracks in some places, is an express in others. The Uxbridge Branch and the Heathrow Branches makes it way longer than the Overground. Expressing problems for passengers in Cockfosters is a much more distant problem than anything London Overground has.

The Central Line too has problems as it is a rural shuttle service at the ends (Woodford to Hainault) in the countryside at Epping and West Risplip. The problem of reporting 41km away is similar to the London Overground issue: does a butterfly in Chigwell cause a storm in Greenford?

Again, when clarity of information couldn’t be more vital, look at this mess. Hope when everything (one day) returns to some form of normality we’ll actually be able to get a simple list of incidents instead of this spaghetti of repeated info in different wordings. 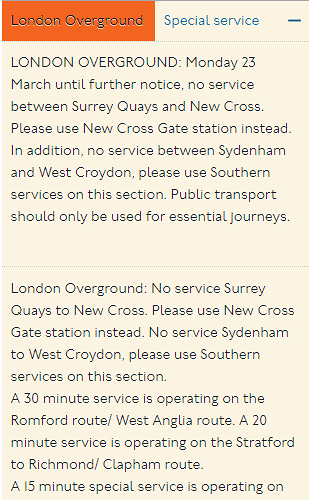 Wouldn’t it be great if someone had made a great network diagram to explain it?