Hi,
Have been getting complaints that predictions for Route 20 have not been available for approx 2 weeks.

Seems OK today so unless something has been fixed it’s not the kit on the buses.

I did see on London Vehicle Finder the last couple of nights that they did show three (I think) buses having operated on the route earlier in the day. That’s well short of the actual number of buses used but the implication is that those three vehicles should have had predictions in the system, I think.

I note that 20 has both MFHo and SMFHo schedules (that is, normal school holiday and Summer school holiday). I wonder if there is a mismatch between what has been assumed to be running and what actually is, though I don’t really know whether that would be enough to stop buses appearing - and why would three buses then appear?

Back to no predictions today. At least, nothing live. London Vehicle Finder shows buses used until 0648 and 0730 (twice). As those buses would have continued in service, their failure to appear is hard to understand, unless my theory in my previous post somehow turns out to be correct.

Out of interest, is this happening for the old http://data.tfl.gov.uk/tfl/syndication/feeds/bus-sequences.csv digest too or just the unified API?

We (LVF) use the Countdown feed, so it’s happening there too.

That’s interesting, that must mean that it’s an input-to-iBus problem, rather than an API-output issue.

But some of them are, as journeys appear for some vehicles at the start of the day, then they stop. As I type, London Vehicle Finder shows no live predictions but is does show one vehicle used from 0530 to 0700, another from 0615 to 0950 and one from 0044 to 0045. I simply do not believe that the first bus operated no more journeys after 0700, which is why the only thing I can think of is that the wrong schedule is being used somewhere and once the two diverge predictions disappear (and perhaps return in the evening).

As we’ve had data throughout the weekend again, I’d say this is definitely a Mon-Fri schedule issue.

This is what we’ve recorded so far today*:

Seems to be working today. What actually went wrong? While it would be nice to know, I ask in the hope that the issue is understood well enough to stop it recurring on the 20 or any other route.

New schedules tend to be uploaded to iBus in the early hours of a Friday morning.

Bang on cue, predictions have (almost) dried up for the 137 starting from Sunday 15th. 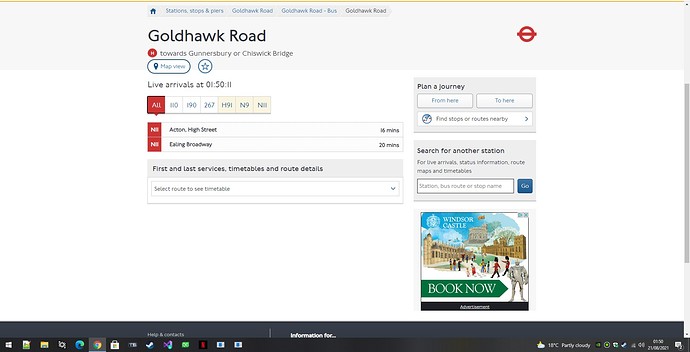 Same for 9. Other services normally serving Aldwych seem OK (I haven’t looked at them all) though clearly buses are being turned short (e g 15 at Ludgate Circus, 172 at Waterloo). I can only imagine that the 9 and N9 are doing something more ad hoc out of line with the normal schedule.

On the 137, I have read elsewhere that there was a partial garage reallocation last weekend. That would normally result in a new schedule but nothing has appeared in the WTTs or on Datastore (maybe it is transitory). Could this be the explanation?

9 was working yesterday, operating between Hammersmith and Trafalgar Square.

I’m sure 9 and N9 are operating but (for example) only four buses are actually appearing in the feed for 9 this afternoon.

Sadly there is no predictions for route 9 and also staying up late i saw there wasnt any arrivals for N9 and N65.

London Vehicle Finder shows 12 buses having operated on the route today, over and above the 3 for which predictions are available. No idea why they have disappeared, unless the schedule has been rendered Extinct by Rebellion. LVF also shows 4 buses having run overnight on N65 but none on N9.