On many underground statements there is an announcement which goes something like "The Northern Line is partially closed between Moorgate and Kennington.

I’ve quoted part of it in bold to illustrate the ambiguity. The line is completely closed between the stated stations. Including the word partially can be misunderstood as implying that at least some trains will be running along that section, which is not the case.

The printed posters are completely clear, but the announcements are ambiguous.

Changing just one word fixes the ambiguity: “The Northern Line is closed between Moorgate and Kennington”.

I’ve noticed that the same mistake has also crept into electronic signs on some stations.

Is fixing both of these the responsibility of anybody here? And if not, can it be passed on to the correct person?

@harry I think you might be wanting a chat with District Dave or Diamond Geezer.

I suspect that TfL’s emphasis different: “The Northern Line is partially closed between Moorgate and Kennington”

I guess this goes back the rather terrible idea, in terms of communications, of making the City & South London railway join with the Hampstead Tube. The rather unique idea of splitting into two in the central area has been confusing tourists since 1937.

There are other problems with announcements too: having lines and stations with the same name isn’t that helpful does a given Victoria Line train go to Victoria: probably not.

I would also love the overblown “terminates at” to be replaced by the better English “goes to”.

Some others that irritate me are:

does a given Victoria Line train go to Victoria: probably not.

I’ve not seen it on bus or tube, but Greater Anglia manages to regularly get out of step between its announcements and reality, with audible and visual announcements proclaiming arrival at completely the wrong stations.

I’ve also been on at least three GA trains where the announcements were for trains going in completely the opposite direction or for a different line altogether.

In every case, the driver doesn’t seem to notice and turn it off, or at least announce a correction.

I suspect that TfL’s emphasis different: “The Northern Line is partially closed between Moorgate and Kennington”

I’ve never noticed any particular emphasis. And there’s certainly no emphasis in the display on the electronic platform signs.

But why be ambiguous in the first place? Just take out the partially that’s unnecessarily causing the ambiguity.

The “this train is formed of x coaches" thing is annoying when it’s part of a scroller. I just want to know how long the train is so I can stand in the right place, but have to wait … for… it … to… scroll … into … view… before I can proceed! (See Stratford International to St Pancras International on HS1)

The change of drivers message is overblown, especially when it’s done at “Lea Valley Interchange” which is a bus depot … with no interchanges.

I just want to know how long the train is so I can stand in the right place, but have to wait … for… it … to… scroll … into … view… before I can proceed!

Yes precisely. But actually Greater Anglia has sorted that one out. Here’s the photo I took of the display that was showing 8 carriages but only had four. 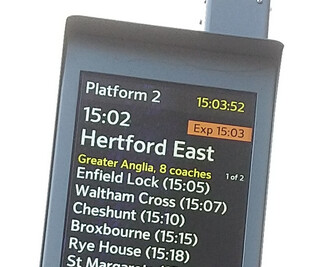 On GA it’s there as a static part of the page. Slightly too small to be easily read from the ground, and it might possibly disappear when page 2 is shown but at least it’s there whenever page 1 is shown.

Oh, and yes – that is the photo of the display as it was shown when I got off my 4 carriage train that everybody had to run from the other end of the station to board.

The driver must have known he had a 4 carriage train, otherwise it would have stopped where we all were (and the people at the other end of the platform would be running instead of us). Perhaps drivers need to be told to check the platform signage (or a web page derived from the same data) as part of their standard checklist before taking out the train.

My “favourite” is (or used to be) “Tne First Great Western train from platform 3…” which leads you to believe that it is the first train out when it probably isn’t. Never mind being careful with the line name; be careful with your company name, er, first.

I think I might have heard that one a few times…

Another one of the bizzard Stratford tannoy announcements is the one saying that “smoking is not permitted on TfL stations and trains for the purposes of comfort and safety management” rather than, say “it is illegal to smoke in enclosed places in the UK”. 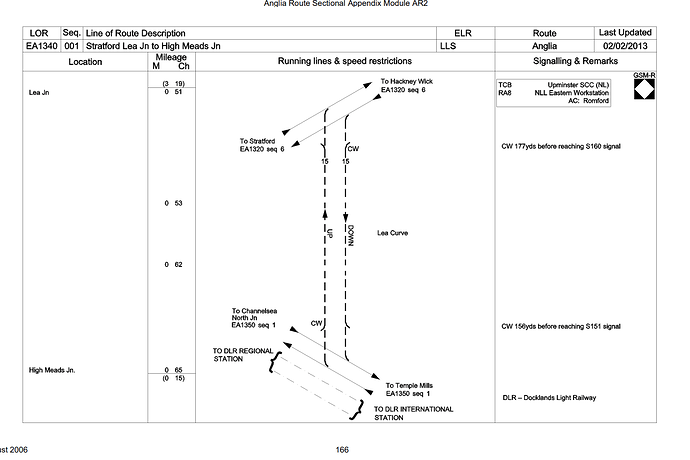