I’ve just looked up directions from Abbey Road (940GZZDLABR) to Woodford (940GZZLUWOF), and I’m a little confused by the IDs of replacement bus services for the London Overground. Here are two journeys I received from the Journey Planner API: 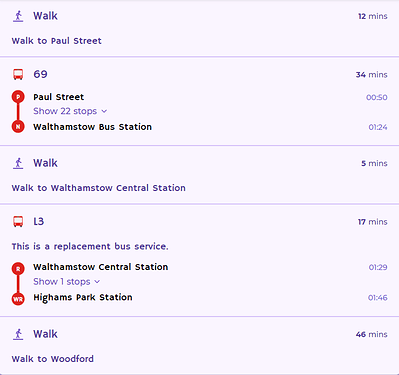 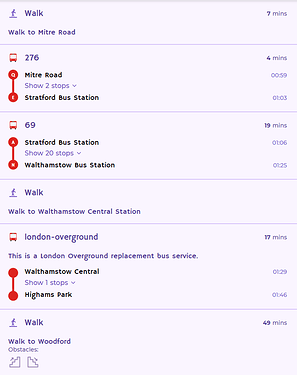 As you can see, both journeys use a replacement bus service for the LO from Walthamstow Central Station to Highams Park Station, yet one of these has the ID “L3”, and the other has the ID “london-overground”.

I extract these IDs from the journey leg summary, so in this case these summarys would begin with “Replacement Bus L3…” and “Replacement Bus london-overground…” respectively. I’m confused about why these don’t both list the ID L3 despite being the exact same service (the origin and destination, and the departure/arrival times are the same for both)?

Also, are there any conventions for naming replacement bus services? I know the central line buses at the moment begin with “CL” and then 1 number, and the Piccadilly line replacement buses recently began with “PL” and then a number, so one would assume it’s the line initial + “L”, but what then happens with the Hammersmith & City line which has multiple initials, and is this naming convention always used? 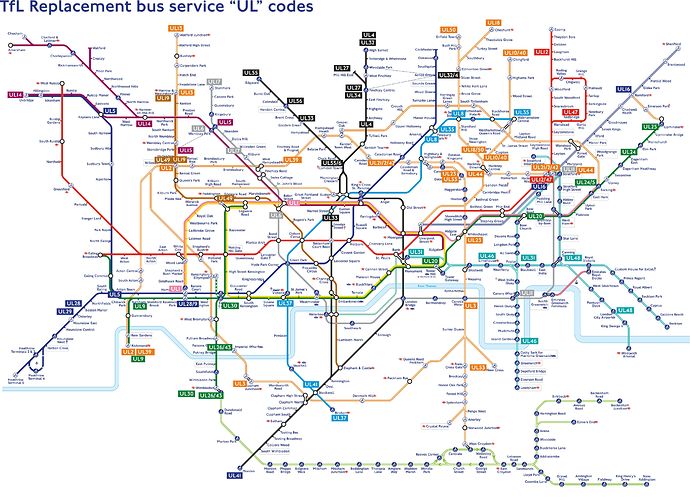 Last time I checked this was the official usage patterns. But “make it up as you go along” seems to be another one.

On some TfL systems (trackernet) the Hammersmith and City and Circle share the same code (“H”). But yes, the circle line is a virtual line overlaying the H&C and Circle (except at the “Cromwell Curve” and “Monories Junction”). To the east of Zone 1 there isn’t a part of the H&C that isn’t District for the sake of replacement buses. 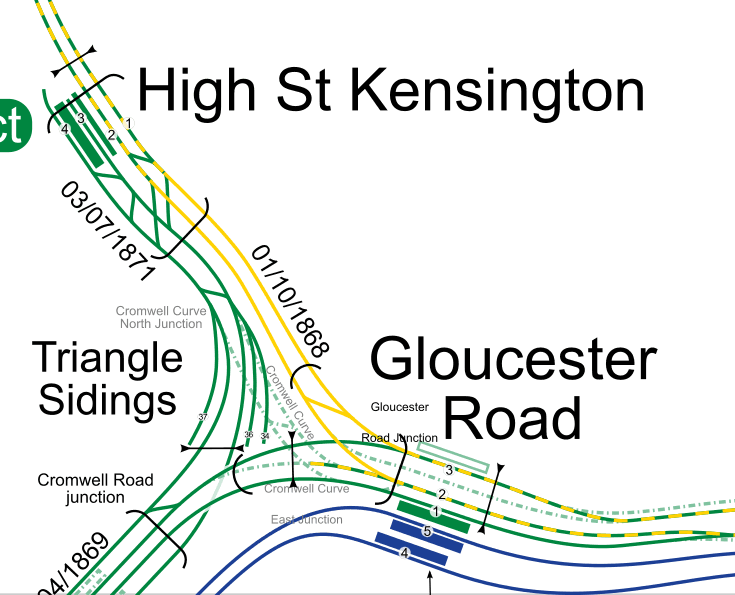 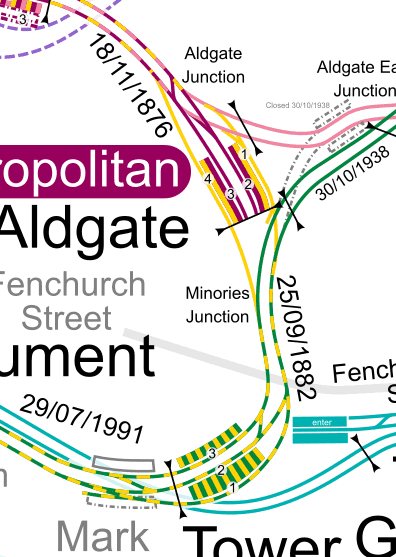 It would appear that https://data.tfl.gov.uk/tfl/syndication/feeds/bus-sequences.csv has finally been taken down.

There are at least two sets of identifiers. There is an internal id starting UL, which is what appears on the Working Timetables and on the Datastore files (but see below).These are (or at least used to be) sometimes recycled. I don’t see any pattern in them relating to line.

Then there are numbers used in publicity. For example, at Edmonton Green on Google Maps you can see lines L1 and L2, numbers which bear no relationship to the internal UL numbers. I have a feeling that this has changed - that the UL numbers used to be shown but have been replaced.

My limited use of the services suggests that sometimes what buses display on a board in the windscreen is “route A”, “route B” etc, to distinguish, say, buses skipping some stations from those serving the lot.

Ah yes, Datastore. One of the five zip files made available every week is for rail replacement services. Looking at the version made available on 9th Feb, I see 33 files. 8 of these are have names of the form tfl_xx_Lrr-U-yo5-nnnnn.xml, where xx is an operator code, nnnnn is the Service Change Number and rr is what turn out to be the last one or two digits of the internal route number. So tfl_8-L14-U-y05-57612.xml is a file for route UL8.

What puzzles me is the other 25. For example, tfl_99-CEN-5-y05-26.xml is a service between Stratford City and Loughton all day on 13th-14th February. It takes 45 minutes so is obviously a bus service (wrong line for queueing up into Arnos Grove). So, does it have a UL code, will it appear in the Working Timetables, what is operator code 99?

With regards to the Replacement Buses IDs the codes CL1 are the public facing service numbers, which replaced the service letters A,B,C etc as these were thought to be to confusing for customers as if there were multiple replacement buses in operation on multiple lines there could be more than one service A so LUL followed LOs lead and created service nubmers for each line with each number relating to a set route (L1 for Hackney to Enfield, Hackney to Cheshunt for example).

With regards to the ULxx these are for internal references only and shouldn’t be displayed on returned trips, (the CLx etc should be shown).

Finally the difference with some routes being shown as 8-L14-U and 99-CEN-5 this is where if a replacement bus has iBus available it will have schedules provided by the operator to London Buses who then in turn provide the data for use in Journey Planner and TxC these will use the ULxx codes, with the first number being the operator code. Where as the routes starting with 99-ABC-xx will be manually inputted by the journey planner team as there will be no iBus data available, with 99 being the operator code for Replacement Buses, sometimes buses will be imported first with a manual timetable then replaced nearer the time with an iBus schedule once the operator is known and have provided schedules.

I hope this helps

Thanks, Matt. I had just (a few minutes ago) twigged that the 99-CEN-5 file was in fact for the same service as 86-L12-U, having seen the new WTT for service UL12. So I would hope that the 99- files all get overtaken by iBus files at some stage.

The change you outline in the first paragraph is very sensible, I think. I suppose it could be argued that the UL WTTs and Datastore files are public facing and that there is a case for changing the designations on those too but from a purely selfish POV they are a lot easier to spot if brigaded together.

None of that explains the different label/description on the Journey Planner for the same service outlined by the OP, of course.

With the initial comment, the replacement bus london overground is from the National Rail dataset which we have no control over, which treats replacement buses almost like a rail service so will be routed from NR station to NR station, which is why on google maps and other mapping tools will show an NR roundel at Newbury Park where NR replacement buses operate from. This is also not as accurate as it will not show the correct stop but a generic Walthamstow Central station where as the buss depart from the Walthamstow Bus Station

I thought they were both Walthamstow Central to Highams Park?

With the initial comment, the replacement bus london overground is from the National Rail dataset which we have no control over, which treats replacement buses almost like a rail service so will be routed from NR station to NR station, which is why on google maps and other mapping tools will show an NR roundel at Newbury Park where NR replacement buses operate from. This is also not as accurate as it will not show the correct stop but a generic Walthamstow Central station where as the buss depart from the Walthamstow Bus Station

But how come the exact same service (same route and time) is reported differently within the same Journey Planner response?

Is there any specific reason as to why the Journey Planner used data from two different datasets for results within the same request? Out of the 3 results returned, one used the NR dataset and one used the TfL dataset for the same leg of the journey.

with regards to this, we receive National Rail data in an automated daily feed from National Rail themselves which we’re unable to edit, the data also contains the replacement bus services for National Rail services, which is why occasionally you will see results like this.