Journey API returns status 300 (Multiple Choices) for some queries between exisitng NaptaIds. Here are several samples. Looks like some stations like new New Cross and Upminster are affected. 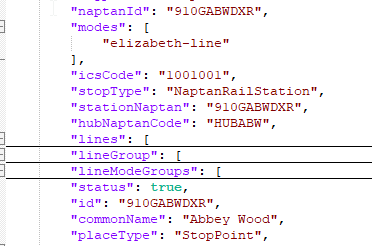 “910GUPMNSP6” is “Upminster Rail Station” without any lines/modes - how can it be possible? 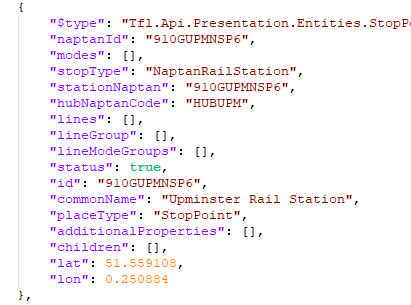 There’s another “Upminster Rail Station” with “910GUPMNSTR” and lines (“national-rail”,“overground”)

Is it bad data or should I distinguish them somehow?

And “940GZZLUUPM” is “Upminster Underground Station” on “tube”

@Ilya If there’s a “hub” Naptan code, it’s always better to use that!

Also, the Journey Planner can be used with comma separated lat,lon too.

Could you explain a little of what you are trying to achieve with your grid?

Apologies for a late reply - I was away 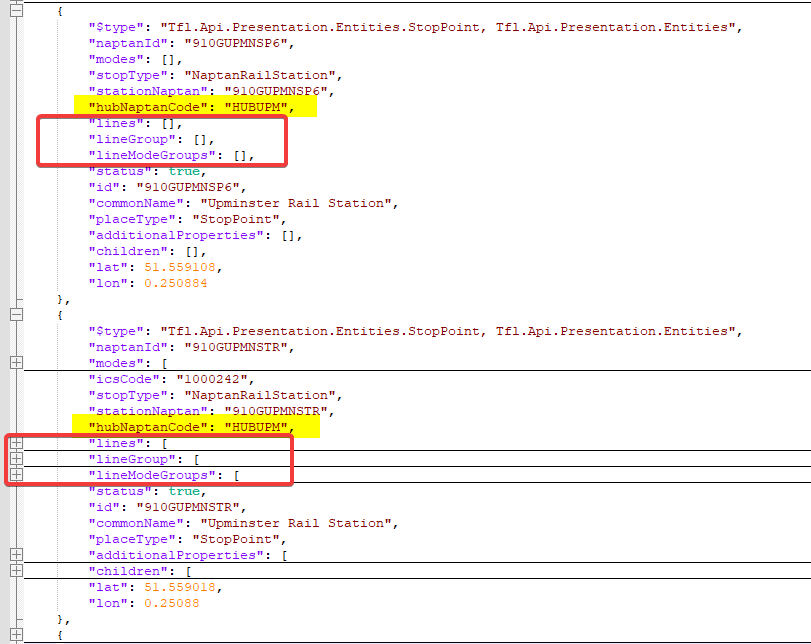 The 910GUPMNSP6 doesn’t have any lines info, modes, properties or children so I think I should use the other one I believe.

“Upminster station” is actually THREE stations. The C2C line, the District Line and the London Overground line. The lines are not totally not connected: the Overground is connected to the rest of the rail network at Romford, and the District line isn’t connected to the National Rail network (mainly because the Underground uses third-rail DC current and the C2C line is overhead AC power, both with different signalling systems).

Hey, I’m getting the same 300 status when trying to do a journey between two post codes.

Here are some examples:

Any idea what’s going on or how I can handle this?

I think you need to ensure you have valid postcodes before you call the API:

You can validate the “inner” part using the PAF: I’m don’t think that there that there is a west-central 1X.

Hey @briantist thanks for your reply.

There most definitely is a WC1X, but you put me on the right track. The ‘from’ parts have incorrect inner post codes, so I guess I will handle this as an error.

Maybe 300 potentially isn’t the right status code to respond with though?

Maybe 300 potentially isn’t the right status code to respond with though?

It’s not by decision! I personally find that TfL has the most logical and helpful error codes of all the public APIs I use. Ever tried voi https://api.voiapp.io/ ?

I personally find that all the Microsoft-based “$type” things in the TfL output somewhat redundant, but otherwise it’s almost wholly consistent and logical.

SE15 6BG, WC1X 8AL and E13 9GG are all valid postcodes, according to https://www.royalmail.com/find-a-postcode

I think perhaps TFL’s API is overdue for having its postcode database updated.

WC1X 8AL has existed since 1980, a quick Google search revealed and appears to be a genuine area rather than a business-specific one. I suspect.that TfL has updated it’s postcode list at least once since 1980!