Unnecesary disambiguation in Via field

Example: Journey from Tottenham Hale to Euston but setting Via to Liverpool Street.

When I enter the Via preference, I’m asked to make a selection: 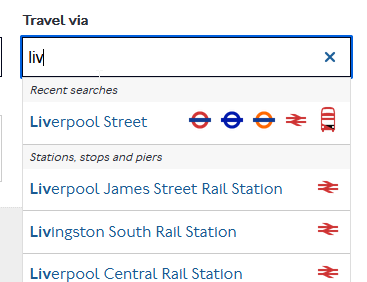 So I choose Liverpool Street, as the icons alongside it include the relevant station options. That ought to be enough to make it clear that I want to go via the station, not by some other place.

But then JP tries to calculate the journey, and no longer understands that Liverpool Street means the station:

That doesn’t happen when I put in Liverpool Street as either source or destination, so it looks like JP is somehow handling the Via field differently to From and To.

So, why does the Via field need to be disambiguated twice?

I found another. Putting Stratford (which should be a well known interchange station

) and then selecting the obvious station results in a “disambiguation” that ambiguously says just Stratford – and then, journey planner rejects it as ambiguous, throwing up several pages of wholly unlikely matches, most of which are not likely to be used as interchanges.

Journey planner manages to disambiguate all of these not really ambiguous errors correctly by itself in the To and From fields. Could somebody have a look and see why it makes such a mess of the Via field.

I note (as i’ve just flow to Greece) that there’s a similar problem with the Single Fare Finder. Single fare finder - Transport for London

If you enter “Heath” as a destination in the “to” box (using "King’s Cross as the Start) it show the Piccadilly Line stations but not the National Rail ones, as well as stations called something-Heath.

Yes, I realise if I typed in Heathrow then it shows all the options, but it’s an autocomplete so why would a person do that?

There are some improvements to the Journey Planner web front end that are being worked on at the moment. I’ll speak to the development and product teams to ensure this feedback is taken on for that work.

There are some improvements to the Journey Planner web front end that are being worked on at the moment.

That’s good to hear. But can you ask them to look into better presenting this example:

That comes up if you click on View Stops and seems to be telling people they should get off at Edmonton Green and walk to the next station. It’s especially likely they would do that if there are a lot of intermediate stations and the “to Southbury Station” heading is scrolled off the screen when they see Edmonton Green at the end, followed by the instruction to walk to Southbury Road.

The same problem exists in something like 50% of journeys if View Stops is clicked.

It could be prevented by including the alighting stop in the View Stops list: 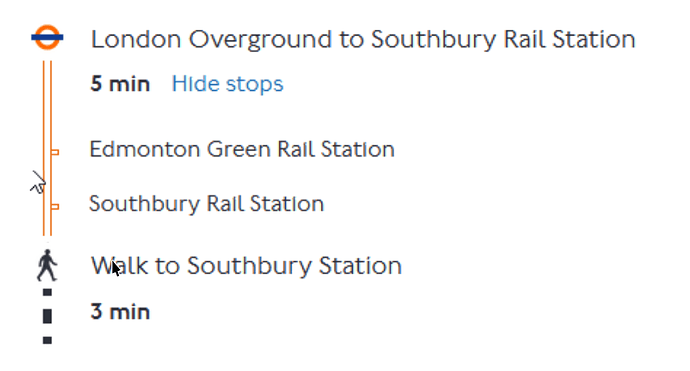 And then there’s this, which is slightly less important but wastes a lot of time unnecessarily: 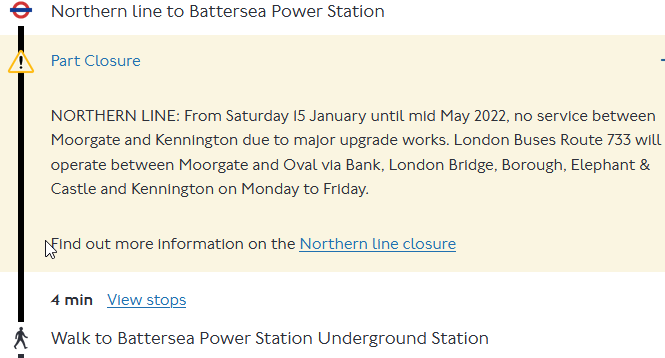 The closure of the line between Moorgate and Kennington doesn’t affect the journey from Kennington to BPS, assuming the journey has been properly planned using the revised timetable. So mention of replacement buses is just unnecessarily confusing. It gets even worse on a journey involving Overground, where the alert is likely to relate to something intensely minor that isn’t even on what most intelligent people would consider to be the same line.

So, include the alerts only if they affect the actual journey planned and if they don’t, leave them out