Wayfinding at London stations with reused platform numbers - can anthing ever be done?

I’m a great fan of BBC Only Connect and I love this kind of real-world oddity, but I am not sure if that below list is of much help to the average visitor to London.

Whilst I can fully understand that there are virtual services out there (Circle and H&C for example), causing platforms to serve more than one line, the fact that 21 of London’s stations use the same platform number for two different platforms isn’t really that useful from a wayfinding point-of-view. Yes, some of these have been around for hundreds of years, but do we reallly need to keep duplicate platform numbers going forward?

Then there are other places (East Ham) where the planform numbers are great and logical and in the dataset … but hidden from view for the real-world H&C/District lines signs. 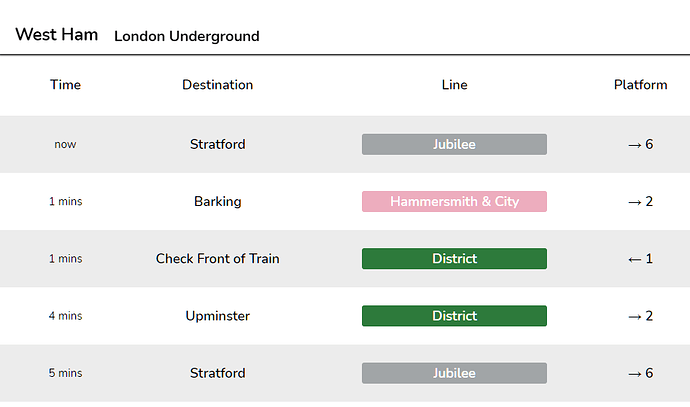 My guess this is at the core of why you can’t use something like a chatbot to give instructions: you can’t say “go to Euston Station and take platform 2” because there are two (plus Euston Square).

Maybe a simple solution could exist.

Taking your summary for Tottenham Hale as an example, we have Greater Anglia with 2,3,4 (1 reserved for future use) and Victoria 1 and 2.

If we adopted a simple prefix (A=above ground, B=below ground) we could number those platforms A2, A3, A4, B1, B2

No change is needed if two stations already have unique numbering. Though conceptually two up two down could also become A1, A2, B3, B4.

If there are places where there are two above ground stations, use the prefix C for the second station rather than B so that there is no confusion from thinking B will be below ground.

If there are places where there are two below ground stations, use the prefix C for the second station rather than A so that there is no confusion from thinking A will be above ground.

Reserve E for Elizabeth line. So A could become EA and B could become EB so that people don’t make the mistake of assuming A was above ground and B was below.

If really needed, then F would be the next prefix (for places with four above or below stations),

A second advantage of adding the prefix is that there would be less confusion on the platform, where “5” can currently be a marker for a 5 car train but be mistaken for being *platform" 5. A person looking for “platform A5” would not be mislead by that marker.

The above would be a good start, but what we really need after that is some proper joined-up thinking with an exit number field added to https://api.tfl.gov.uk/Journey so that a person can be told “Leave station by exit 7, turn left for Bus Stop W on same side of road” which is a frequent cause of missing a bus (hint: nobody knows where they are or which direction they are facing when they come out of an underground station and GPS probably won’t work for a minute or two afterwards, so directions like North, South or Continue aren’t helpful either).

Then continue the joined-up thinking by making sure it’s possible to see Exit numbers (and toilets!) signposted on every Way Out sign so that people don’t end up taking a random exit and ending up on the wrong side of an uncrossable railway line. And next, ensure that every station exit and bus stop shelter at a station has a correct-facing (not north-facing) map showing routes between the stops and the station.

If we adopted a simple prefix (A=above ground, B=below ground) we could number those platforms A2, A3, A4, B1, B2

I’m not sure if making thing more complicated what what I was suggesting.

But there was literally no need to use the closed platform numbers at Tottenham Hale when “reinstalling” platform 2: it would have been as nice a Platform 5.

Ditto, why Stratford International DLR could not have been platforms 5 and 6? No reason at al.

But there was literally no need to use the closed platform numbers at Tottenham Hale when “reinstalling” platform 2: it would have been as nice a Platform 5.

When the Meridian shuttle opened, the existing platform 1 became platform 3 and the existing platform 2 became platform 4. Then the new platform became 2, leaving number 1 free for a notional future platform to Meridian. They could sensibly have used 4, 5 and 6 leaving 3 spare. But presumably GA is in charge of numbering the above ground platforms and they didn’t see the necessity to have unique numbers with Victoria line. And come to think of it, I don’t remember Vic 1 and 2 platforms being physically numbered anywhere, they’re just signed as North and Southbound.

But what it demonstrates is that it’s perfectly possible to renumber platforms. People at TH soon got used to platform 2 being called platform 4.

I can see the changes on old maps.

Side by side georeferenced maps viewer - Map images - National Library of...

This document doesn’t really help on the issue about different companies at the same station, but if you care about platform numbering I guess it’s a bit interesting.

It gives an explanation for why some of the Piccadilly line platform numbering is a bit random, though I wasn’t quite convinced; it doesn’t explain why the South Ealing platforms are numbered in the opposite direction to Northfields and Acton Town either side of it. My theory is that the exceptions on the line are the ones that obey the rule and some project at those stations dug its heels at some point to conform, but no-one could face changing all the rest.

@netstruggler Thanks. I get that there are “historical reasons” for things.

I’m just wondering if, living in the moment (as self-actualised people do) it might be possible to actually do something about it.

Given that there is an upcoming station rename on the cards (North Greenwich to Greenwich Peninsular) with all the wide-scale reprinting of maps, direction and signage, it might be possible to think of those of a non-historical bent and fix the tfl-owned platforms to make them fit with the (impossible to change) NR ones.

It would be easy, for example, to change Blackfriars District line platforms to “5” and “6” (or even “E” and “W”). TfL could do this! It is totally within the powers of TfL to do this.

And at somewhere like Waterloo, just add “30” to the tube platform numbers. They could all be changed using a £20 worth of Johnson-font self-adhesive “3”!

This is a totally solvable-by-TfL thing!

I think the problem really comes down to whether the stations are combined within a gateline or not. Blackfriars, Elephant and Castle, Tottenham Hale, Stratford International are all completely different stations. You first direct people to the correct station (NR or LU or DLR) then direct them to the correct platform. In some of the cases you mention (eg Elephant, Shadwell) you actually have to go out into the street between the stations.

Addressing your West Ham example, all the platforms are within the one physical station hence they are numbered differently. The same is sort of true with Lewisham because the facilities are shared between the two stations and the DLR is ungated so it’s not clear cut where the demarcation between stations is.

There is also a missing station from your original list, or are the two Bethnal Green stations considered to be too far apart to be confused? If yes, how far is too far?

Finally, I concede that Finsbury Park does now break the two station rule as they have both now been combined within the same gated entrances.

There is also a missing station from your original list, or are the two Bethnal Green stations considered to be too far apart to be confused? If yes, how far is too far?

That’s easy to answer: the official Out-of-station interchanges - Transport for London are not the same station. The official distance is “10 minute walk”

So, back to the basic point, yes there are stations with mixed gate lines that are sometimes tube/non tube - but this is also true of Liverpool Street mainline and King’s Cross mainline where platforms are grouped off into two sets and St Pancras mainline where there are four groups (Eurostar, Southeastern High Speed, Thameslink, and East Midlands Railway) and Victoria has three groups (Southern, Southeastern and Gatwick Express).

I don’t think the existance of separate gatelines at stations like Victoria or Liverpool Street is necessarily the same as separate gatelines for National Rail and Underground services at Charing Cross. In the case of the former they are clearly all one station on the same level with uniquely identified platform numbers. For the latter they are clearly very separate stations, even if one of the entrances to the Underground station is in the National Rail concourse. It’s still quite clear that you are entering Charing Cross Underground station.

St Pancras is somewhat different, of course, but there is no duplication of platform numbers at what is called St Pancras International, and the Underground station is actually called Kings Cross St Pancras.

I feel I do need to further clarify your point about nearby stations under 10 minutes walk being out of station interchanges. They are not necessarily the same thing. South Hampstead and Swiss Cottage are linked by a dotted line on the map but there is no OSI between those two stations. Battersea Power Station and Battersea Park/Queenstown Road are within 10 minutes walk and are OSIs but are not shown on the map. 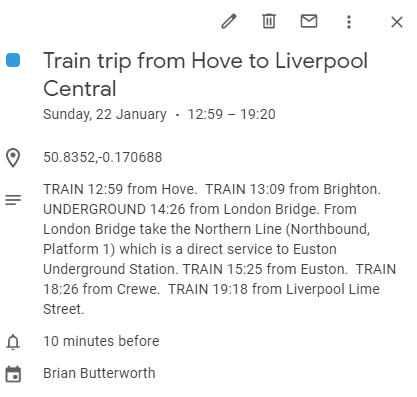 It specifically says "From London Bridge take the Northern Line (Northbound, Platform 1) which is a direct service to Euston Underground Station.

It is another example of the unfair use of a duplicated platform number at London Terminus that that traveller is somehow to “just know about”. And there are though- trains at the National Rail part of the station on platform 1 to 9.

Again just add 30 to the TfL platforms and the problem goes away!

99.9999% are humans on trains not travelling around with an Bradshaw’s → they just want to get to places with the least confusion.