A request from a non-tech bod. We are a charity and need to route plan around 3,000 postcodes of family data to their nearest hub. This will help us decide the optimum location for a new hub we are opening. Is there any tool/way of doing this please?

Here’s our website, in case you want to know more about us www.littlevillagehq.org

Please note the opening line…not a tech person, so hoping there is some magic way for me to bulk upload a spreadsheet!

It’s not too hard to do, but it’s not really something you can do with a spreadsheet with the TfL system.

If you want to send me the list of postcodes privately**, I could probably do this for you with a bit of code. The output would be a CSV file, which you can load into Google Sheets/Microsoft Excel etc.

I’m going to guess you have a list of possible new locations and you want the typical journey time to them?

Would you be after … walking times? Public transport times? Car times.

Another option is the Google Maps Directions API - https://developers.google.com/maps/documentation/directions/overview - but again I don’t think there is a “codeless” version. You can get a free intro offer from Google.

(Of course, it’s Microsoft who give free stuff to charities) https://www.microsoft.com/en-gb/microsoft-365/nonprofit/office-365-nonprofit-plans-and-pricing

** postcodes by themselves don’t cause a GDPR issues as they don’t identify individuals, but groups of houses.

Thanks so much for responding.

You are right, we are looking at how convenient it would be for families to visit us. I will send you a PM to explain more.

@briantist …completely inept of me, but how to I reply privately?!

Oh yeah, they don’t have it here!

@briantist. Thanks! I’ve sent you an email.

" Following a Government consultation on 1 April 2010 Ordnance Survey released co-ordinate data for all Great Britain postcodes (but not their address elements) for re-use free of charge under an attribution-only licence, as part of [OS OpenData]."

I have no need or wish to check this out but I presume that “attribution only” means that you have to give OS a credit. The coordinates would presumably be some form of centroid, which is fine for where most people live but not so fine for Wester Ross!

I guess you don’t have to do that if you are using TfL or Google Maps API. It’s not in the T&Cs as I recall.

Note. it might be better to use the PTAL system 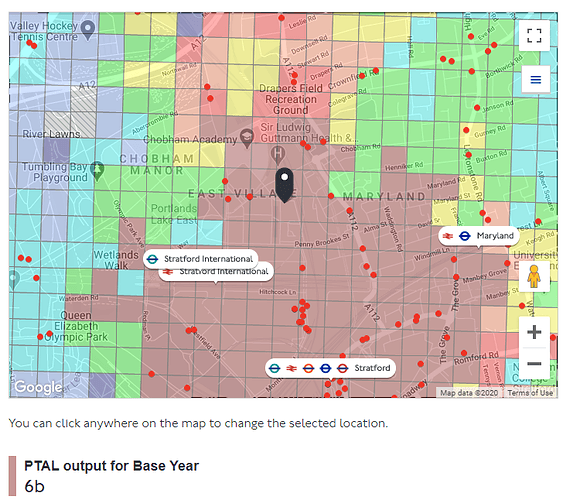 @briantist Thanks. Really interesting. I am going to have a play with it and see what comes up.