The London Overground services to Chingford are quite poor (in terms of London Transport service)/ The service only four train per hour they don’t stop at London Fields and Cambridge Heath: the line shows the double-dagger for on the Tube Map - shown yellow then orange below.

The reason for this level of service is that Liverpool Street to Chingford trains share their paths with the Stanstead Express service, which means both stopping trains and Airport Express trains passing though Clapton, which is a bottleneck - shown yellow then pink below.

I note that the “Up and Down Electric” lines between Liverpool Street and Stratford now have no notable services on them because Liz is Live.

Would it be possible, then to re-route the Liverpool Street to Tottenham Hale section of the Stanstead Express via Stratford. Yes, it is 4km longer, but the line is very high speed because it’s straight not going along ancient curved viaducts - - shown green below.

If the Stanstead Express went via Stratford this would free up capacity for more Chingford Trains (like the other London Overground lines) as there wouldn’t be conflicts with the airport express. This was a stated goal when these lines were taken over, as I recall.

I guess the only question is what happens to the four trains per hour that start at Stratford and go via Lea Bridge to Tottenham Hale?

One could would be to extended these to use the Up/Down Electric to platforms 16 and 17 at Liverpool Street, and/or extend the couple of the Overground North London Line trains from Stratford to Meridian water: there is a special single-track line just north of Lea Bridge to carry trains to/from Meridian Water. 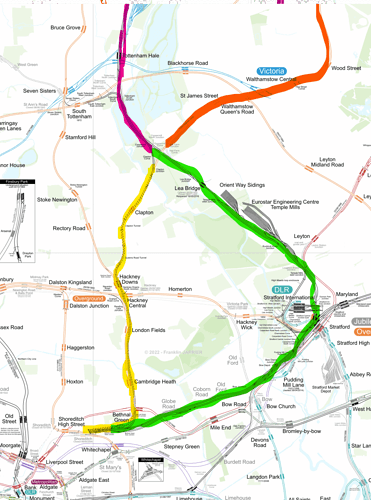